The patient in this case study is a 57 year old female currently being treated for symptoms associated with TMD and damaged teeth related to nocturnal bruxism with a Full Lower arch occlusal splint prescribed by her dentist. The patient has been wearing the Full Lower Arch bruxism guard for over 15 years but symptoms of jaw pain and ongoing headaches persist. The patient is nearly 100% compliant wearing the guard for tooth protection. The patient was studied using the DDME Bruxism Monitor over 3 nights:

The DDME Bruxism Monitor is FDA approved to be used for the differential diagnosis of sleep disorders. The monitor measures oxygen saturation, nasal airflow, abdominal and chest wall volume and synchrony as well as detects the presence of snoring, the magnitude and frequency of nighttime bruxism as well as the other parameters required for the diagnosis of Obstructive Sleep Apnea. The purpose of the 3 night study was to evaluate DDME’s BRX Pro* appliance for reducing night time Bruxism in comparison to the patient’s current treatment using a Full Lower Arch bruxism guard. It is commonly known that single arch bruxism guards can actually increase airway instability causing increases in severity of Obstructive Sleep Apnea.1 The patient’s three nights studies were reviewed by a Board Certified Sleep Physician and the interpretation of those studies are in the discussion section.

Data Comparing a Lower Full Arch to the BRX Pro™

The current study was conducted over 3 nights evaluating the patient at baseline using no treatment appliance, while using her current single full lower arch treatment and the third night was conducted using the BRX Pro. Below are definitions of parameters that the DDME Bruxism Monitor quantifies. 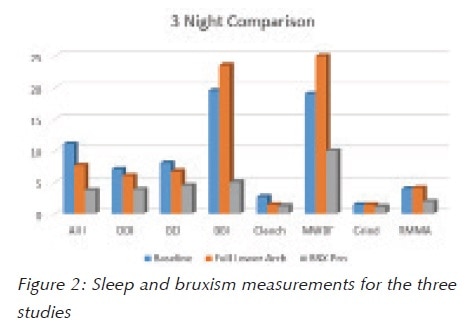 The BRX Pro significantly reduced the total jaw muscle activity when compared to baseline as well as when compared to the full lower arch therapy. This is demonstrated in all of the bruxism parameters, the BEI, BBI, number of clenches, and number of grinds and Rhythmic Masticatory Muscle Activity, (RMMA). When normalized to the total energy expended by the masseter muscle activity at baseline, using the full arch showed there was an increase of 21%. Using the BRX Pro decreased total energy expended by 73% compared with baseline energy use. Assuming that jaw and facial pain is correlated to energy expended through the night, it is likely that the use of the BRX Pro would decrease the patient’s complaint of jaw and facial pain.

The three night study was reviewed by a Board Certified Sleep Physician and the patient was diagnosed with mild obstructive sleep apnea. Although use of the Full Arch Splint did lower the AHI and ODI, it did not resolve the condition to bring the patient into a normal range. In this patient, the use of the BRX Pro did resolve the OSA condition and was diagnosed as successfully treated with the BRX Pro. The BRX Pro is not yet approved for treatment of OSA. It is designed to be used for Bruxism treatment while minimizing airway obstructions caused by Full Arch Splints. In this patient that goal was accomplished. The AHI and ODI parameters were used to confirm that it did not increase airway obstruction as has been associated with other bruxism guards.
Rhythmic Masticatory Muscle Activity, (RMMA) is a measurement of masseter muscle activity. A lower frequency of episodes is usually found in normal subjects than in bruxers.4 A lower RMMA indicates good consolidation of sleep as seen in normal subject while a higher RMMA indicates the presence of arousals and bruxism. In this patient, the Full Arch splint actually increased the RMMA episodes compared with baseline, while the BRX Pro significantly reduced the RMMA episodes when compared with baseline.

The results found in this patient demonstrate that symptoms of TMD and damaged teeth as a result of nocturnal bruxism may be best managed with a device that offloads the contact between the rear teeth while taking into account the position and stability of the mandible. This is evidenced by the overall improvement of sleep quality using the BRX Pro compared to the traditional single arch splint. In this case the patient has been using a single full lower arch for many years which was successful at protecting her teeth although some TMD symptoms persisted. We believe the continued tooth-to-arch-to-tooth contact while wearing the single arch splint exacerbated the persistent TMD symptoms. While using the BRX Pro the offloading of the tooth-to-tooth contact and the maintaining of the mandible in its natural neutral position further reduced the overall Parafunctional EMG activity compared to the Parafunctional EMG activity measured while wearing the single arch splint. Further research is needed to see if this same effect is seen in disparate patients.

The BRX Pro™ is an adjustable dual partial arch occlusal splint designed to alleviate nocturnal bruxism while maintaining the position of the mandible. This is achieved utilizing 2 key design components: First the BRX Pro maintains the mandible in a neutral and natural position by utilizing a four position adjustable anterior hinge that allows both lateral and anterior-posterior mandibular movement to prevent a fixed tension on the masseter muscles, a known cause of oral appliance discomfort. Secondly, the trays used to fabricate the customized appliance are only partial arches covering approximately 80% of the tooth arch, which effectively leaves the posterior teeth separated by an air gap that prevents both direct tooth-to-tooth contact as well as the force contact that occurs through a full arch bruxism guard. The result is effective tooth protection without compromising the performance of the airway seen in many patients using single arch splints as well as a significant reduction in masseter muscle activity.
The fabrication of the appliance is extremely simple so that a hygienist or other trained office staff can construct the appliance using a process that is identical to taking impressions to send to a dental lab. The position on the interlocking trays is set by the dentist following a consultation with the patient. The position of the interlocking arches is a key component and places the mandible in its natural neutral position. Maintaining the mandible in this position obviates the effects of the single arch occlusal splints often interfering with the patency of the airway during sleep. The correct setting of the trays is of primary concern as there is a known correlation between airway patency and the frequency of nocturnal bruxism for many patients.1 (see appendix A) The BRX Pro should be the first choice for patients with persistent bruxism or who demonstrate characteristics known to present with a propensity for increased airway obstruction using single arch appliances.